Early in 2016 I received a call from Atlanta, Georgia. A gentleman was calling to learn more about one of our featured plans, the “Chestnut Mountain”. Mr. Slaughter wanted to make some changes on the plans by adding to the length of the home on one end and by attaching a full log garage.

These types of changes are relatively common when standard log home plans are customized.
In the following few months we were going back and forth with some ideas and made some additional changes. Windows were removed and moved on the exterior log walls, door opening directions changed...Ron really liked the square log profile that Jim Barna offered and also requested rustic hand-hewing on all exterior walls. By early Spring blueprints were finalized and a detailed proposal was created
for the log home kit. 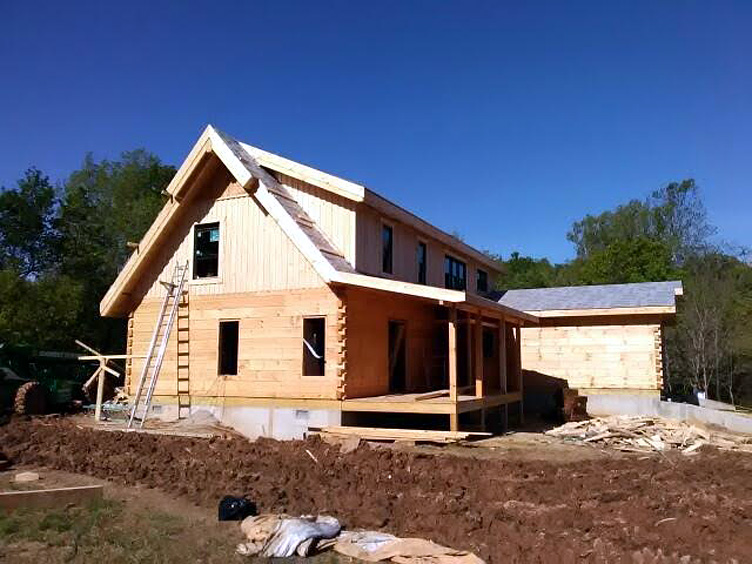 According to the initial plans, Ron was planning to sell his home in Atlanta and move back to Southern Missouri where he grew up. I visited him in Atlanta and we signed the purchase agreement soon after the blueprints were finalized. We were planning to put the order on the manufacturing schedule soon to deliver the log home kit in May.

Just a few days after I traveled back to Tennessee, I received a call from Ron and learned that he had to cancel the order due to personal reasons. After discussing the reasons and details on how we would handle the cancellation, Ron told me the following: “...I still have the plans and who knows what the future holds for us”

After a busy Summer and Fall season, one day I was ordering some of those miniature log cabins for my clients as a surprise Christmas Present when I thought about Ron and his dreams to build his
home in Missouri. I thought that I would surprise him with one of those tiny log cabin chapels. My younger son and I built one of those for Ron, personalized it with a note and mailed it to Atlanta together with a Christmas Card.

Ron’s call in early January 2017 caught me by surprise. He called me to say hello and to let me know that the package had arrived. He also told me that there was nothing stopping him from moving back to Missouri and that he wanted to restart the project.

Jim Barna Log & Timber Homes’ design department still had the blueprints. We updated a few details
and manufacturing started. The log home package was delivered in April and Ron’s home has been dried in. An experienced dry-in crew traveled from Kentucky to build the shell of the home and Ron has hired a local contractor to take over and finish construction.

Ron asked me if I could ask the design department to put all the elevations and the floor-plans on one, large sheet of paper that I would also sign. He was planning to frame it and hang it on one of the inside walls. I was honored to comply with his request.

Please contact us to receive a free estimate and information about our 40 th anniversary promotion.